Preventable onset of myocardial infarction through coadministration of two drugs.

Scientists at Kumamoto University, Japan have discovered both a regression of coronary plaque and a lipid-lowering effect may be obtained through the coadministration of two drugs. The effect is stronger than previous therapies and has the potential to become a new treatment for the prevention of the onset of heart conditions such as myocardial infarction and angina pectoris.

Ischemic heart disease is the leading cause of death in the world and second in Japan behind cancer. It causes blood vessels to become clogged or narrowed through the buildup of cholesterol plaque along the inside of artery walls. This plaque buildup restricts blood flow to the heart and leads to heart damage or heart attack. The development of a drug treatment has long been anticipated.

The administration of a statin to lower “bad” cholesterol (LDL-C) values is the standard lipid-lowering treatment for heart disease patients. However, even with a statin therapy, more than half of all patients still develop heart disease. One explanation for this is that even though the treatment with statins inhibits cholesterol synthesis in the liver, it also promotes cholesterol absorption in the small intestine.

Researchers at Kumamoto University, Japan investigated the coadministration of statins with the cholesterol absorption inhibitor ezetimibe. The study, performed by the Department of Cardiovascular Medicine at Kumamoto University in collaboration with 17 other domestic facilities, culminated in a clinical trial of patients whose LDL cholesterol levels were 100 mg/dL or more (the normal range for healthy adults is 60 – 139 mg/dL) who were also undergoing percutaneous coronary intervention to widen their arteries with a balloon or stent. Patients were divided into a statin alone treatment group and a statin + ezetimibe coadministration treatment group. The target LDL cholesterol level was 70 mg/dL or less. Changes in the volume of atheroma, which contains lipids and other debris that tend to adhere to artery walls, were assessed after 9-12 months of treatment.

"At the end of the trial, we found a clear difference between the two groups of patients." said Dr. Kenichi Tsujita, who led the research. "The average LDL cholesterol level of the group of patients treated with statin alone went from 109.8 mg/dL at the beginning of the experiment down to 73.3 mg/dL at the end. On the other hand, the average LDL level of the group that received coadministration of statin and ezetimibe went down from 108.3 mg/dL to 63.2 mg/dL. In other words, the single drug treatment group had 29% lower cholesterol, whereas the cholesterol of the combined drug treatment group was lowered by approximately 40%."

Furthermore, the volume of atheroma was significantly different between both groups. Patients in the combination group had greater negative remodeling of blood vessels and showed outstanding plaque regression compared to the single treatment group.

"Significant plaque regression was especially seen in patients with acute coronary syndrome." said Professor Ogawa, head of Cardiovascular Medicine at Kumamoto University. "The research showed that the coadministration treatment efficiently and safely lowered LDL cholesterol levels, reduced the absorption of cholesterol in the body and produced greater regression of coronary artery plaque compared to statin only therapies. This treatment for high risk coronary artery disease patients is expected to be very useful clinically."

This study was published in the “Journal of the American College of Cardiology" online on July 28, 2015.
http://content.onlinejacc.org/article.aspx?articleid=2411160&resultClick=1 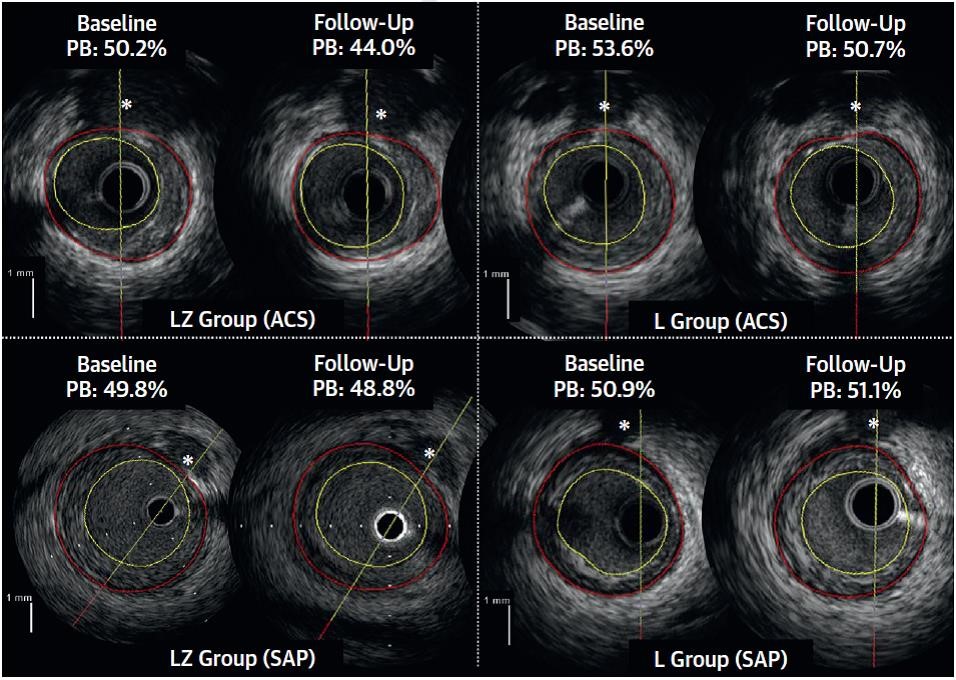