Mitochondria found to be protected by ketogenesis

Ketone bodies are generally an alternative energy source during starvation, but in newborns, ketogenesis is active regardless of nutritional status. In a recent study from Kumamoto University (Japan), researchers analyzed the effects of ketogenesis in mice and found that it has a protective effect on cells by maintaining the function of mitochondria. They expect that this effect can be used in future therapies for protecting mitochondria and organs.

Ketones, along with glucose and fatty acids, are metabolites used as energy sources. In particular, ketones are known to be an alternative energy source during periods of fasting or starvation. However, ketogenesis is known to be active in the neonatal period regardless of the number of calories consumed during nursing, and role it plays in newborns is not well understood.

To search for answers, researchers generated ketogenesis-deficient mice that lacked the gene for HMG-CoA Synthase 2 (HMGCS2), an important enzyme ketogenesis. Their analysis showed that, in the absence of ketone bodies, the mice developed a severely fatty liver during the neonatal period.

"During a rapid increase in fatty acid intake with postnatal nursing, active ketogenesis under normal conditions has a protective effect by preventing excessive acetylation of mitochondrial proteins and maintaining mitochondrial function," said study leader Dr. Yuichiro Arima. "We believe that this result will be used in therapeutic applications for mitochondrial and organ protection in the future."

This research was posted online in Nature Metabolism on 18 February 2021. 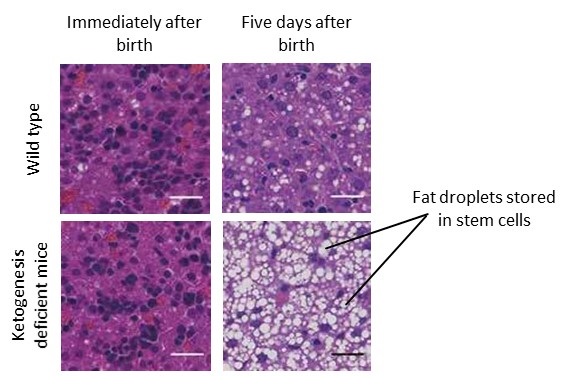 Normal state with HMGCS2 (left) and insufficient ketogenesis with HMGCS2 deficiency (right).
Compared with the normal state, the following was observed in the ketogenesis-deficient state:
1. Acetyl CoA, the raw material for ketone bodies, accumulates in the cells.
2. Excessive acetylation of mitochondrial protein (mtP).
3. Dysfunction of the TCA cycle as a result of 1 and 2.