An investigation by an architectural researcher from Kumamoto University, Japan has revealed the high possibility that a wooden stage existed in the theater of the ancient Greek City of Messene during the Greek Classical period (ca. 369 BC). The evolution from the rustic, open theaters of ancient Greece to the magnificent theaters of the Roman times clearly demonstrates the passion that the people had for the theater.

The ancestor of modern theater architecture is the theater of ancient Greece and Rome. The simple and open ancient Greek theater (around 323 BC – 31 BC) was composed of a circular orchestra, a stage, and bowl-shaped seating area for the audience. In the Roman times (31 BC -), the stage grew higher and was decorated with marble column pillars which eventually evolved to splendid, closed theaters with integrated audience seating. The development of this theater construction was thought to involve a change in the theater stage at the end of Hellenistic period, but the details are not yet known.

After its excavation in 2007, a large storage room and three stone rows were discovered beside the stage of the theater at Messene by a group from the History of Western Architecture Laboratory of Kumamoto University who were conducting a field study. Two similar cases are known to exist in close proximity to Greece, one at Megalopolis and one in Sparta. However, researchers had differing opinions about the specific functions of the storage rooms and stone rows found in these ruins.

The Kumamoto University researcher carefully scrutinized and compared the three sites and considered the appropriate functions of the stone rows and storage rooms. He determined that the stone rows remaining in the Megalopolis theater, the oldest of three, would have been used to set up wooden background picture panels, and the stage storage room would have likely been the custodian of such panels. Furthermore, the stone rows in the theaters of Sparta and Messene have similar dimensions. If it can be considered that the two theaters were complementary to each other, then the possibility that an additional stone row, which would have provided wheel tracks of standard size, existed at these two theaters becomes clear.

What was the purpose of these stone rows? In the Hellenistic theater, a one-story building called the "proskenion" was placed on the stage. The Proskenion was used as a stage background and it is thought that actors were also able to speak from its balconies. Behind that was a two story "skene" that was used as both a dressing room and another stage background. In the past, it was thought that the proskenion and the skene were either stone-built and fixed or wooden and wheeled. If they were wheeled, they would have moved as one massive construction along three stone rows. As a result of their investigation, however, the Kumamoto University researcher proposed that the proskenion and skene were separate constructs, each with their own set of wheels, and that there is high possibility that each proskenion and skene was pulled in and out of the storage room on two stone rows respectively.

Ancient literature makes it clear that that there were rotating stage devices in both Greek and Roman theaters. The newly discovered stone rows and storage rooms at the Messene Theater are important remains that show the likelihood is extremely high that mobile wooden stages existed in the theaters of the Hellenistic period. Future research is expected to clarify the appearance of a wheeled wooden stage like that in Messene and the influence it had on later stage building. 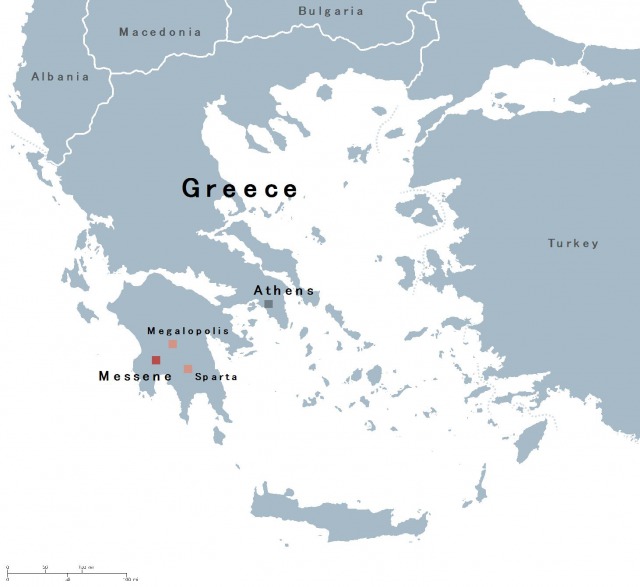 The location of Messene
CAPTION: Messene is near Megalopolis and Sparta in Greece. 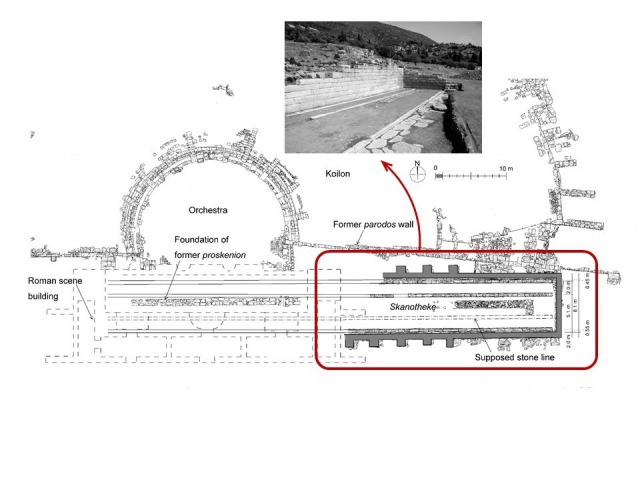 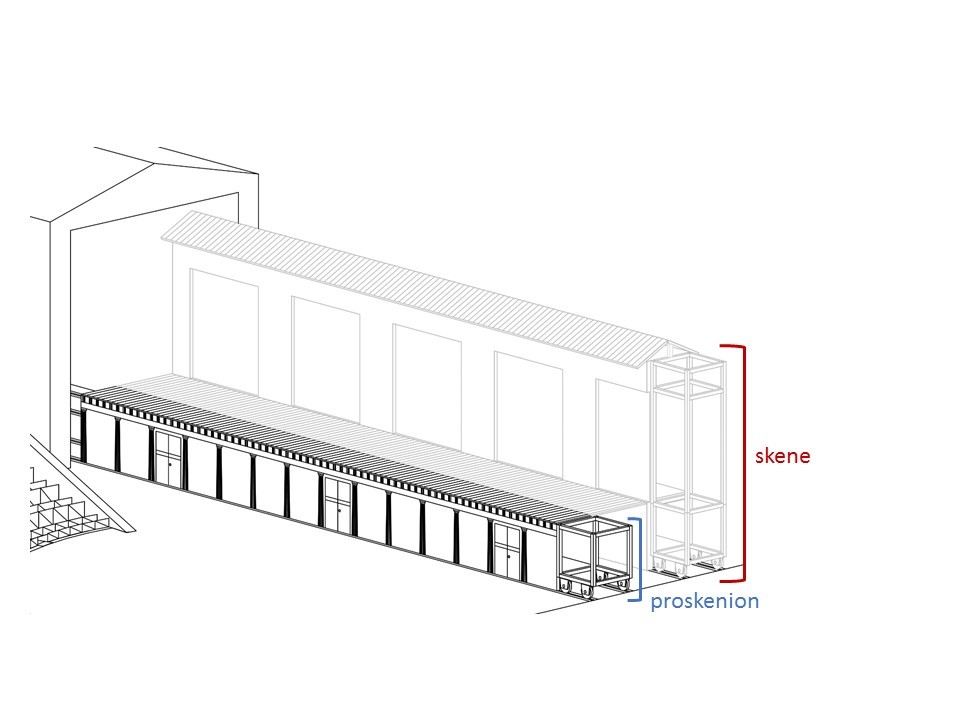 Proskenion and skene with wooden wheels
CAPTION: Reconstruction of the wheeled wooden skene of the Messene Theatre. The wooden stage building (front) is drawn by solid lines, and the hypothetical scene building (back) by gray lines (drawing by K. Oyama) (R. Yoshitake, The Movable Stage in Hellenistic Greek Theatres. New Documentation form Messene and Comparisons with Sparta and Megalopolis, AA, 2016/2, p. 123, fig. 6）