A joint research project based in Kumamoto University, Japan has developed a new, highly sensitive analytical method that can detect degraded β-lactam antibacterial agents used in the treatment of bacterial infections. With this method, researchers found that reactive sulfur species produced by bacteria degrade and inactivate β-lactam antibiotics.

Previous studies have reported that hydrogen sulfide (H2S), which bacteria produce during sulfur metabolism, reduces their susceptibility to antimicrobial agents leading to resistance. However, the detailed mechanism causing this are not yet understood. Researchers at Kumamoto University previously showed that the molecule cysteine persulfide, a combination of H2S and the amino acid cysteine, has an extremely potent antioxidant effect that is not found in H2S or cysteine alone.

In this study, researchers examined how this reactive sulfur species is involved in the acquisition of resistance to β-lactam antibiotics. They discovered that β-lactam antibiotics such as penicillin G, ampicillin, and meropenem (carbapenem antibiotics) rapidly lose bactericidal activity when exposed to cysteine persulfide but not with hydrogen sulfide. A detailed study of the reaction between β-lactam antimicrobial agents and cysteine persulfide revealed that the β-lactam ring, which is essential for bactericidal action, decomposes and a sulfur atom is inserted into part of the ring creating carbothioic acid. The production of carbothioic acid from a β-lactam antimicrobial agent appears to be a novel degradation metabolite.

"Our newly developed analytical method makes it possible to quantify the amount of carbothioic acid discharged from bacteria with high sensitivity," said Professor Tomohiro Sawa, who led the study. "We believe it will be possible to screen for compounds that inhibit bacterial synthesis of cysteine persulfide by using carbothioic acid as a biomarker. Such a cysteine persulfide synthesis inhibitor in combination with β-lactam antibiotics is expected to inhibit antibiotic degradation and result in successful treatments with a lower concentration of β-lactam antibiotics. This should also help to reduce the emergence of new resistant bacteria."

This research was posted online in "ACS Chemical Biology" on 30 March 2021. 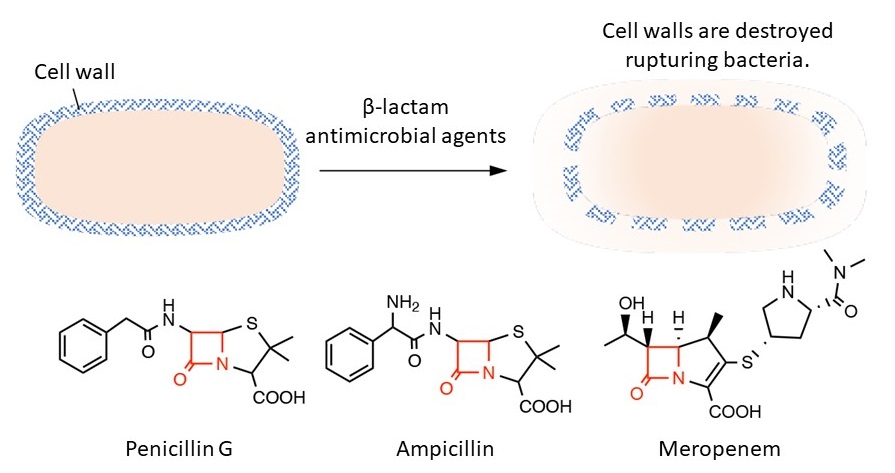 Top: β-lactam antimicrobial agents rupture bacteria by destroying their cell walls.
Bottom: The red text in the structural formula represents the β-lactam ring, which is essential for bactericidal action.

[Usage Restrictions]
To use this media elsewhere, the authors request a reference to the original work (this release) be included.

Hydrogen sulfide (H2S) is attached to the thiol group (-SH) of cysteine.

[Usage Restrictions]
To use this media elsewhere, the authors request a reference to the original work (this release) be included. 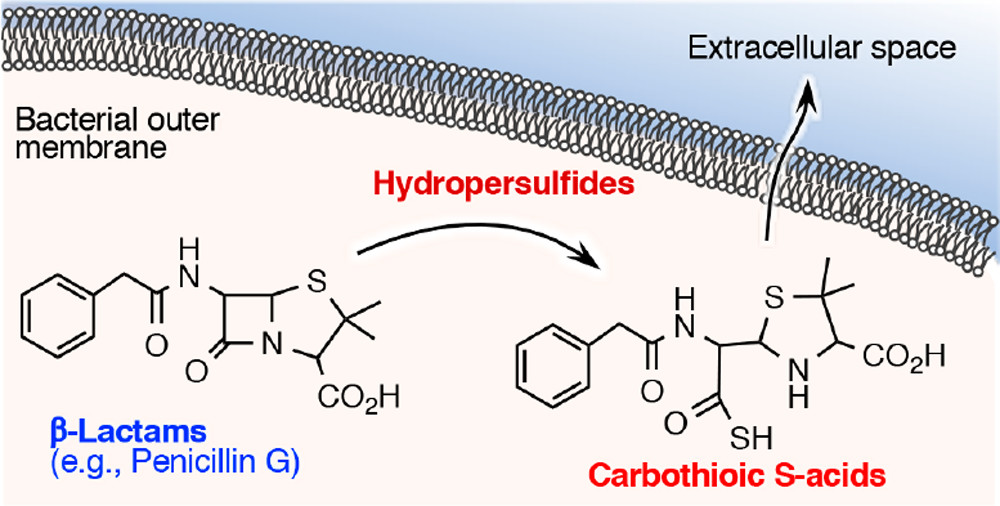 β-lactam antimicrobial agents inside the bacteria are degraded to carbothioic acid and then discharged.

[Usage Restrictions]
Graphical summary of Ono, K. et.al. 2021. Further permissions related to the reuse of this image should be directed to the ACS.